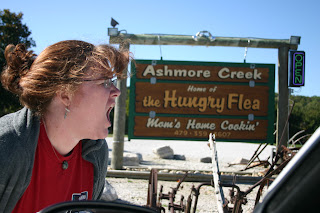 Mmm mmm mmm. The Hungry Flea ate at the Hungry Flea! I highly recommend this eating establishment/flea market to anyone traveling through northwest Arkansas on route 187. Or is it route 62? The entertainment was great (the owner sat and talked while we ate and he is HILARIOUS), but the food was better. Generous portions of yummy breakfast dishes.

Our family spent the last 4 days camping in northwest Arkansas. And, true to form, I took scads of pictures! If you click "scads of pictures" you'll see everything from the setting up of the tent to the adorable town of Eureka Springs, AR. You'll also see pictures of the suspension bridge featured in the movie Elizabethtown.

You can see an even prettier picture of the bridge here, at the campground's website. We camped in Beaver, AR; AKA The Middle of Nowhere. A very scenic middle of nowhere. Our tent site (we tent in what we affectionately call The TajMaHal), was just a stone's throw from the suspension bridge, which is also single lane and a joy to cross. Not only is it a joy to cross, it makes a humdinger of a noise when it is being crossed - almost exactly like an old wooden roller coaster full of screaming teenagers. The driving surface is old wooden beams, seemingly bolted to ... something. Pretty to look at, but not fun for someone with a bridge phobia. But back to that noise? Wonderful in the middle of the night. Other than that, the campground is fantastic. I think next time we'll just camp on the other side, closer to the swimming side of the river. And the camp staff was wonderful.

The weather for this trip was phenomenal! A little windy, but the nights were perfect. Sunny with a hint of clouds, blue skies abounding, a half moon with just enough light. Who could ask for more? And the people, everywhere we went, were as friendly as could be! The fishing ... the fish were NOT friendly. My three boys (yes, Chris is my boy when it comes to fishing) spent one afternoon on the river bank and caught nothing. But the dogs spent quite a bit of time in the water scaring the fish.

Believe it or not, Chris knows how to scare up some yummy camp grub. We had scrumptious meals every night, with s'mores to top things off the last night. Oliver has about perfected the art of roasting marshmallows. It probably helps that we've found the perfect tool for the job.

The down side to this whole trip was the sleep. I don't think any of us slept for more than an hour at a time, and I doubt I got more than 6 hours sleep in three nights. I don't exactly feel tired, but the migraine symptoms have been lurking. That said, I'm off to an early bed.