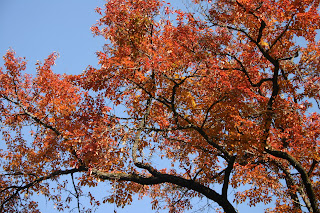 The fam took a simple outing today, only an hour and a half from home, to the Illinois River, winding it's way up from Tahlequah, Oklahoma. Oh my but it's beautiful country. The leaves are turning just a smidge, the weather today couldn't be more perfect (sunny and about 65), and we took the scenic route for fun.

The Babies came with - of course - and had a great time in the water. Poor Flash just keeps swimming till he's about to drop. This was his first experience in an actual river with a current. Chris and the kids kept throwing rocks for him to fetch, sending him out into the current, watching him drift downstream. Oliver was practicing his skipping, sending Flash farther every time. Eventually Flash was whining instead of barking, so we knew it was time to come home.

Nathaniel was practicing his sketching today, having sketched for his Webelos troop while hiking yesterday. I took a couple of pictures of him sketching, but the last picture of the day was the scene he was working on, so he can finish the picture at home.

Chris found a wiggly green fishing worm on the beach, threw it at Mae and she fell down. Unfortunately, I didn't photograph her falling down, but the series of pictures following makes it look very much like Chris and Oliver are kicking her while she's down. Then beating her with the walking stick, after which she runs away. I just love pictures which tell a story. Even when that story is a lie.

What a wonderful Sunday! I hope that you also had a glorious day. You know, that you weren't sick or anything. Or had to go into work on your day off to catch up. Nothing like that. Or maybe family you don't like called or came to visit. That would be sad. No, I hope that you had a really good day. Just like me. Not that I'm rubbing it in or anything.

You're funny!
I'm glad you liked the Illinois...you'll have to go "floating" down it next summer. Yes, floating. As in "We went on a float trip down the Illinois." - no paddling allowed. Although, usually it involves more than a little beer. But that might be a little much for your kids.

Hey, Troy once dove off some high bridge into the Illinois. While on a float trip. And, yes, that involved a lot of beer. I wasn't there.
Ok, I'm going to stop commenting now.

I think my kids would probably like it if the float trip involved beer, but Chris wouldn't allow it. It actually sounds very good, but I'm prone to sunburn, and beer makes me forgetful. I'd come home blistered if I drank while floating.

I actually took a canoe trip in college down the Illinois. Came back very blistered, and no beer involved. Hey! Maybe I SHOULD drink and float.

No kidding? He drove off a bridge and lived? One of my biggest fears.