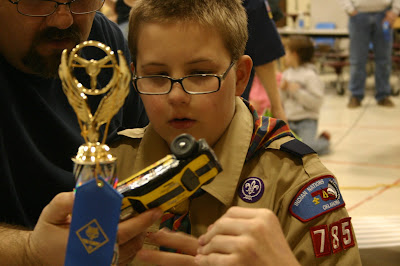 Best in Show! That's my boy! My boys. Hunny and Little Guy worked so very hard on their car, both of them sanding and painting and stinking up the house. The night before the race, they spent hours painting and curing and detailing the Drag Star racer.

Their curing method was certainly interesting, and for awhile I thought it was deadly. Hunny decided the oven - MY oven - was the best way to cure the paint coats so they could get the car finished in time. I'm surprised we didn't all die in our sleep! The entire house REEKED of paint fumes all evening.

But the end results 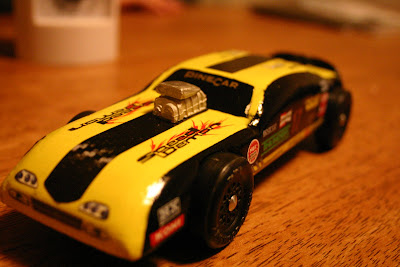 were well worth the fumes. A pretty car. Excuse me - I almost made Little Guy cry when I said it was pretty. It's COOL. Like those action figures upstairs in the display case - they're Star Wars dolls. Action figures. Puhlease.

I'll leave you with a shot of the WINNING CAR. The prettiest car.

Wow, that car is beautiful! I mean it! My son's car came in last (boo hoo).

Little Guy's car wasn't the fastest, by any stretch. I'm sorry y'all didn't win. This was our first year, so we didn't know about design for speed. And next year it looks like he'll be in Boy Scouts, not Pinewood! Boo hoo indeed.

That? Is a FANTABULOUS car!

We haven't done the Cub/Boy scout thing with our boys. But I vividly remember it with my brothers growing up! The Pinewood Derby races were the coolest! There were even a few years where my dad was the Scoutmaster, (over the whole pack) so he got to design a couple of tracks. Beyond awesome for my brothers!

That is one very......COOL [not pretty!] car! Congrats for being related to the winner :)

You guys are so sweet! It is ... cool, isn't it? My husband's not usually competitive, but he was a designer in another life and had fun helping Little Guy. Aw, now I'm all warm and fuzzy inside. :)

That car is awesome, your son has a great dad!

That's a neat car! Timothy did most of his alone. I helped some with the finishing touches. Sadly his did not win. He took it okay in the end, but he was disappointed. He had a neat idea though and I thought it looked great. Just not enough time was put into the weight distribution. Carl has been working so much he didn't get a chance to help at all and I think that bothered him a bit too. Here Webelos go through 5th grade and then you go into the official Boy Scouts so I know Timothy has one more year to do a car.

We were told that Webelos went through the middle of fifth grade, then Boy Scouts after Christmas. So this was his one and only race.

I'm sorry it didn't go better for y'all. We watched all of the cars with skinny front ends take wins, weighted in the back. There was one REALLY cool car that had a live guppy swimming around in a little dome affixed to the top. It was actually pretty fast and I think it won best in show for the Wolves.

Tell Timothy hi for us!

The car is far too slick to be "pretty." Perhaps "awesome?"

Hmmm.. I hope we have another year. If we don't, he will be really unhappy. The weight in the back is the key.
I will let him know.