Random Wednesday - Because I Can't Wait Till Friday 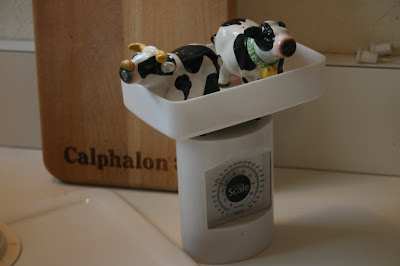 Fred and Bessie are obsessing about their weight again. It must be because of those pesky New Year's resolutions, no? Or maybe they want to lose weight so they're not slaughtered for the next pot roast. How can I convince them that they're not edible?

In other news, we're supposed to get two to four inches of snow tomorrow! YAY!!! A big thank you to all of you to whom I wrote and asked that you send your snow my way. :) Way to go. Now my Little Guy can try out his new Christmas sled, the only thing he asked for this year. It's been killing him that he hasn't been able to use it.

And whose idea was it to make teenagers? I swear, if they came out as teenagers 1) it would hurt SOOOO much more 2) no one would ever have kids 3) did I mention how much that would hurt? Two of my newborns were over 10 pounds and THAT was too much. Burgh Baby's Mom posted about her darling toddler who communicates like a teenager. Like MY teenager. Me: So how was your day? Teen: I don't want to talk about it. Me: Will you want to talk about it later? Teen: Maybe. Grr.

Is it just me, or is anyone else out there near the end of their first masters class and procrastinating? Just me? Okay, then I need to get back to my homework.

P.S. If you're new to Bessie and Fred, check out the side bar for links to the back story. :) I'm thinking of giving them their own blog.

lol! Do cows need to diet? Don't thye have two stomachs or something like that?

Guess they've been eating to much popcorn...

I think it might be the lentil stew, actually. This morning I found them in the stock pot and it was totally empty. My stew! I'll have the picture up in the next day or two, but I have several Fred and Bessie pictures sitting in the camera, waiting.

If kids were born as teenagers, not a single one would survive to see the age of one. We'd eat them all.

I don't know that I'd necessarily EAT them. Ew. You don't have a teen yet, so you're probably not aware of how smelly and gross they can be. Not sweet smelling like babies. EW!!

What was your Air Force test score?

Like 30 seconds or something? I did it awhile back and was so frustrated that I didn't want to try again. I suck at video games too.

I would LOVE the bigos recipe. My email is lilahdanielle@shaw.ca
Thanks!!

Teenagers... they exist so you can know why animal moms eat their young. Mine actually survived and has moooooved out-- only four more to go!

I wouldn't tell Bessie & Fred they're not edible. Fear can be a great motivator to behave. Who knows what havoc they might wreak if they know they're free from being tomorrow's dinner.

Teenagers... *sigh* ...don't get me started. Last summer we made the garage sale rounds and I bought my 18 y/o daughter everything she needs to set up house. Everything. She has no reason not to move out the day after graduation. I will be happy to help. Tough love.

I know a family who encouraged their kids to live with them till they were married. Some even after they were married. Drove me nuts! I keep thinking I'll be glad that mine learn independence and how to survive on their own, but I'm torn now. Still ... only my own laundry to do?

It's funny how you can love your kids SO MUCH and yet you still find yourself thinking, "Hmmm...only 10 more years 'til FREEEEEEDOMMMMMM!" *insert Braveheart yell here*

I love your random randomness!

Oh, and hey, how do you get your comment box to say "Spit it out. C'mon. Just say it." I want to do cool things like that in my bloggy world!

Lisa, I went to the Comments section of the Settings. Scroll down and you'll find it. :)

I keep telling my teenager that its a good thing he was a cute baby, and that I'm just claustrophobic enough to NOT want my permanent address to be a very small jail cell. *sigh*

please stop scaring me...lol...
mine are just 2 1/2 and 4 months... and i already have more unruley grey hair than anyother color !!

Just came upon your blog by back-tracking through the meme tags. You're fun to read, and I shall visit again. :)

Fred and Bessie should join WW. The they could get out to some meetings and make new friends and stop worrying about the world coming to an end.

If kids came out as teenagers, there would not BE any kids. At all. There is life after teenagers though - watching them have kids of their own - oh yeah baby, now THAT is entertainment!

I get that "I don't wanna talk about it" a lot from my teenager too.

Oh, your cows are killing me. Too funny. My brothers MIL collects cows. He had to give her 10 cow figurines when he got married, to prove his wife was a 10 cow wife (a la Johnny Lingo.)

Teenagers are so that you wish they were gone. But when they leave you actually want them back - even as teenagers. It's a strange life this parenthood. :)

I am scared for my daughter to become a teenager. If she is anything like me I am VERY SCARED!

Hello! I found you thru dyln and just got caught up on Bessie and Fred. They are great! The only problem is that NOW I am hooked on two love stories: PW's BH2TW and the Saga of Bessie and Fred!!!

Hi Lori! I'm so glad you like my cows! I just finished a photo shoot with them - they have a thing for posing - out in the snow! Since they're from Louisiana, I don't think they'd ever seen snow. I don't think they liked it, because they weren't cooperating at all!