Well, this has turned into a continuing episode of Gardening With the Good Flea. Or better, Guess What the Good Flea's Growing, Because She Has No Idea! In today's installment, let's look at this little green thing: 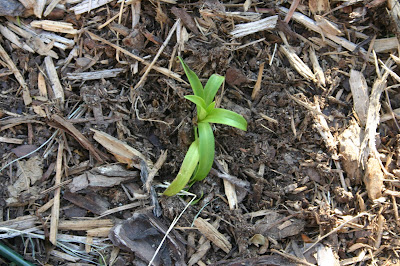 And its cousins, coming up in the crack between the bed and the sidewalk: 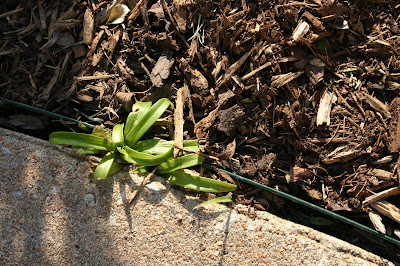 You all are probably right - many of you said that the plant I posted yesterday (and the day before) is probably a lily of some sort. I'm going to wait and see a bloom, or at least a bud, then pick a winner from the lily comments. Till then, look what else is growing in my garden! 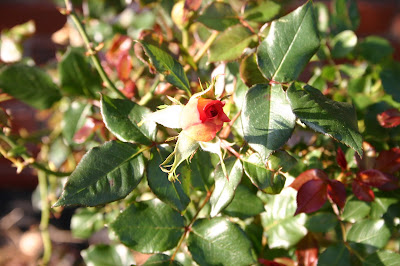 Last year my side bed - on the north side, where I'm going to put hostas once the siding's installed (please, God, let it be in the next month!) - was covered in weeds. I pulled and pulled, but shredded my hands for all my trouble, not making much headway with the weeds. This spring, on a beautiful, cool day, before much was coming back to life, my Mom hung out here for the day and helped me pull weeds in the side bed. Who KNEW that pulling weeds was easier when they are dormant?! Not me. I lived in the South, where weeds are NEVER dormant. So the entire bed is weed free, and this pretty miniature rose bush (don't let the "miniature" fool ya - it's a huge bush with tiny roses) is thriving now. Last year I questioned its ability to survive. 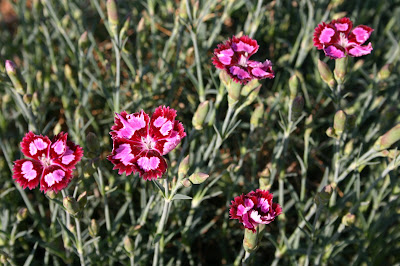 We bought these dianthus late last spring, the same time we planted the carpet phlox, and they were little. Now they're taking over the bed and just beginning to bloom, right as the phlox are fading to green. Aren't they cute? I'm thinking of splitting them, as well as the phlox, and just letting them have the entire plot. There are some weeds which have been tenacious and I'm hoping these things will smother them.

So that's today's episode of Gardening With the Good Flea. Hope you enjoyed your time here. I really hope you can tell me what that little green thing at the top is. I don't think it's mondo grass.

hey nice post........i think it is
Coix lacryma.
grass species with wide ranges of uses, both edible and ornamental.

Beautiful! Those dianthus and the phlox will really spread, too. And don't you love the cinnamon-y scent of the dianthus?

I am not a green thumb in any way, but I'm almost positive that is NOT mondo grass.

Your flowers are looking so pretty! For some reason lately, lack of green thumbs aside, I have really been wanting a garden. Maybe it's the Spring Fever, or the really wanting a house, or just because everyone I know is sprouting things left and right...

My potted plants are still alive and actually thriving, so I guess that will do for now. :)

It's still too early here for anything other then daffodils to bloom. :o(

Sp jealous of all your flowers. I hope we manage to get some here soon!

I love dianthus. I'm still going with Lily on the top one!

Beth from the Funny Farm said...

That could be another lily Flea, but the fact that it is coming up along the side too argues against it being that. Mondo grass is not dead hardy in my zone, so I don't know anything about it, including what it looks like when it is little bitty. The rose is beautiful and I love the dianthus!

LOVE that rose bush! Please post more when it blooms all the way.
Hey, I have lots of Hostas. Some are dark green and some verigated. I should split them and send you some and then you can sent me some dianthus. Too bad we aren't neighbors!
The finger is better, thanks for asking. It healed much faster after the stitches came out! I'll post a picture of the after probably next week. FUN!

She is still upset!

I enjoyed this post - those flowers may be the only "garden thing" i get. I started some seeds, but I have nowhere to put the seedling. Pout.

Hey - that last picture is a rose. Am I good or what?

I've been thinking of doing something like this myself! The people that owned the house before us had beautiful gardens and I am lost as to what many items are or how to care for them. I think I may be growing a lot of weeds.

I'm a big fan of the phlox, even if it sounds like some sort of boil.