The Case of the Missing Eyebrows

So last Monday night, the Hunny and I spent time with friends. At their house. And we were not home. In fact, we didn't get home until after Little Guy's bedtime and he was in bed. Oddly. The next morning I was having a tough time waking up, so I didn't really notice Little Guy's eyebrows. In fact, it wasn't until Tuesday afternoon, when he was badgering Oatmeal Head that I heard Oatmeal Head yell (for my benefit, I'm sure), "Oh my gosh! What did you do to your eyebrows?"

Of course I call Little Guy downstairs to see what madness has occurred. At first glance I thought he'd gotten into my waxing box, which I'd left on the counter as a reminder to do my own eyebrows, and I had to take Maybelline to guitar, so I left fuming just a tad. And I left Little Guy denying that he'd done anything. Like maybe rats gnawed them off in the middle of the night.

Evening comes, I'm home giving him the third degree, getting angry tears of denial and harsh statements questioning my love for him since I don't believe him. I just sent him to his room till dinner, refusing to be drawn in to his arguments of how it couldn't have been him who sheared his eyebrows off. Lou. That's what it was. Lou scratched the eyebrows off while they were playing. Stupid cat. Uh huh.

So the Hunny comes home, trying his best not to laugh, while I'm still steaming a little, and questions him. It turns out that our bored son snipped away with scissors the night before because he was bored. Talk about a role reversal - the Hunny thinks it's amusing (he was always the one to be incensed) and reminds me that the other two went through similar things when they hit the puberty wall. He argued against punishment, stating that Little Guy having to live with badly trimmed eyebrows was punishment enough.

Never one to humiliate my children *cough* I penciled in Little Guy's eyebrows for the rest of the week before he left for school. Yes. Yes I did. And I know that you didn't read all the way through this just for the story. Unfortunately, I didn't get a good picture of him without the penciled in brows before yesterday and it turns out his hair grows quickly. Here's what I have: 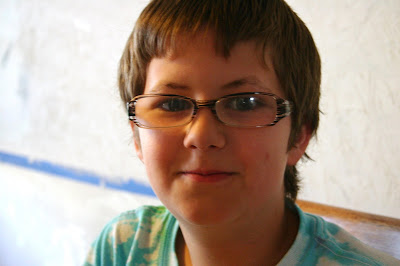 I know. It's nothing like it was on Tuesday. Sorry. The arches (he has the most wonderfully arched brows!) are what took the brunt of the cutting. And he didn't want penciling this morning, since it really is growing back in. That or the guys at school gave him a hard time about wearing makeup.

My eldest once cut a HUGE lock of her hair off because she wanted it for her "crapbook" - (it was in a horrible place, too - and there was no maskng it) I just let it grow out naturally and no one ever commented on it. I think ALL kids experiment. lol

Love the mischevious grin on him!

I know from experience that having to live with only half of your eyebrows is punishment enough. I accidently waxed off half of mine one time and when I tried to pencil them in the heat (middle of summer) melted them off. The hub was always wiping away my melting brows.
Poor little guy, hopefully you used water proof brow liner :)

Hey, I nearly took off half an eyebrow earlier this week, too. sloppy waxing job...all that is left are the blonde hairs that no one can see, so I have to pencil mine in a bit, too. ;)

Oh, OH! What a kid! One day catching tadpoles, the other a clipmaster.

I could shave my brows and no one would notice. They're completely blonde, as are my lashes. I am constantly fielding questions about my health when I don't color them in. I've found an old mascara works best for brows. No melting, and it matches my lashes!

Nobody call me a freak, please. :D

love the picture... mr personality all over it!
Hugs

I love knowing that little girls aren't the only ones who make all types of hair disappear!

I recently lost my eyeLASHES while burning brush. Got too close to the heat, and the next morning while applying mascara I noticed they had shrunk by two-thirds! Good news -- they grew back to normal length in less than a month.

P.S. You can draw on eyebrows, but when the lashes go, you're just screwed.

Now this is good. A good story for his wedding toast;)

When my daughter was 6 she cut a huge chunk off the side of her hair and said it just fell out.

Getting eyebrows chewed off by rats would be a HUGE problem - I would have to send my husband out there to stomp them for you!

This made me giggle. Kids do the SILLIEST things!!

Next time he touches his eyebrows, make sure to pencil in a moustache and goatee to match.

Oh, that is just entertaining!
I once tried to trim my own bangs in High School. Yeah, that didn't work to well. My younger, smart-mouthed sister called me Buzz for 2 weeks!

This is already a good story, and it's bound to get better with time.

All of us have to do at least one whacko thing as kids, I think. If the worst thing he ever does is take scissors to his eyebrows, you can be proud and know that you have some really good kids.

If you check out the picture on my blog, behind the glasses is almost no eyebrows. I have never had anything near real hair. I'm not sure if it was all the wrestling I did as a kid or just bad hair genes. Two Dogs decided to run for the position of VP on the write in ticket so I am stuck in the Presidential spot. If you just don't have a candidate write me in. MUD

Oh my gosh! That is so funny! He doesn't look the least bit shy about it. :)

Oh, this took me back to fifth grade and this kid came to school without eyebrows... the teacher we had was a few marbles short of a game anyway and she pulled the poor kid back to her teacher's closet where there was a mirror hanging and she yelled at him for how stupid it looked. Mrs. Wakefield, may she rest in Purgatory.
And really,in defense of Little Guy, maybe he has a stress or Thyroid problem and they just fell out while you were out of the house...

Jock? Actually took the razor and shaved his... from the center going in, so he looked really strange. He only did about a half inch or so on each one, but ever since, they've grown back lopsided. He did that when he was 10 or so, I think, and he's almost 15 now.