Grandma came for dinner last night just before the Hunny got home from work. Maybelline was telling the story of how she found the kitty just as Hunny walked in the door. So he sat down to hear the story of the cat. About three sentences in, when Maybelline said, "The cat's been scratching at this door down the street for about three days ...", the Hunny did a double take.

"What? How long had you been watching this cat? Even I'm not that heartless." Our children's heart for the wounded and defenseless of the world has touched him. That and hearing Little Guy go on about wanting to run an animal shelter when he grows up, and this is the perfect way to practice. Seriously, Little Guy has always wanted to run an animal shelter. I keep telling him to major in business and marketing so his shelter will stand on it's on and thrive. He has the drive.


I looked into the garage last night, to make sure the door was shut, and saw that it had been left open about a foot and a half. And there was a bowl of cat food just inside the door. And Little Guy said that Dad told him to feed the cat.

Now the real problem: Maybelline has already named this thing Twilight (I thought she said Toilet), Little Guy named her KitKat, and I've named her Bella. It suits her. She's plain but beautiful all at once. A stray in need of love and affection. And maybe the cat-eating dogs will let her stay?

Wait! Don't go! I sat on the front stoop last night, after calling Bella out from the garage, and took pictures. I didn't realize how difficult it would be to photograph a love starved kitten. She was rubbing all over me, playing with the camera strap, rolling off the stoop. Silly kitty. Here, with no narration, are photos: 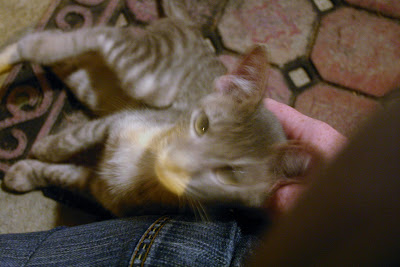 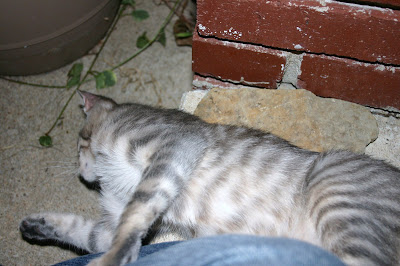 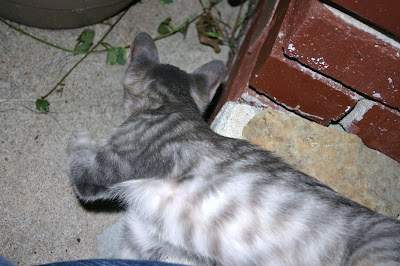 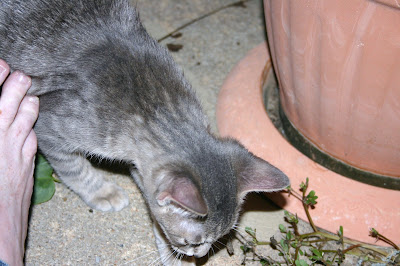 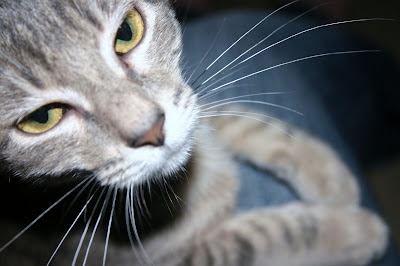 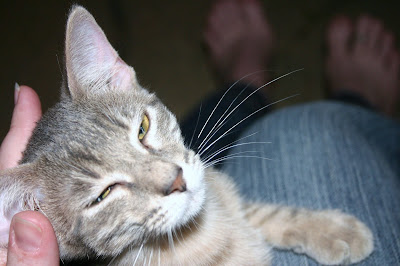 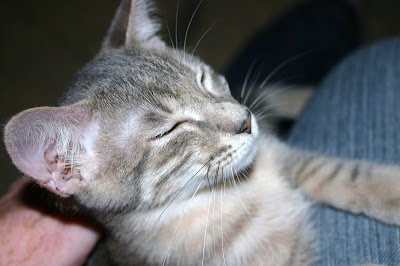 I do believe that cat has found her/himself a permanent home! Best way in the world to get a new pet. Just lovely, Flea!

Are you still looking for a home for her? She looks too sweet to hang out in the garage!

I hope you get her to the vet today to get her shots. ;) She's beautiful.

Awe, that kitty looks like he needs a good scratching and a bowl of milk!!

What a little sweetie!

DH said he could almost see the purr in the last two pictures... kinda like you can almost taste the fuzz in a peach smoothie?

She is pretty. I would be more than happy to take her, but my house already has two cats. One very territorial girl, and one very Alpha male. I don't see adding another to the mix, might throw off the balance in the Force.

I think maybe she could get a combination of the names. Bella Twilight sounds nice.

Look, the first time a cat ever wanted a Flea!

Oh, and I would like to add that you have the greatest kids. Ever.

What everybody else hasa said. She is beautiful. Congrats! You have another child!!

What a pretty kitty!

That is a really sweet looking cat, I mean look at it's face. Not plain at all. A keeper for sure.

That's not a plain cat - she's gorgeous! I guess I'm biased, though, because she looks a bit like my cat. :-)

She is a sweet kitty! Sounds like she is home. Maybe she will charm thos cat-eating dogs.

She is beautiful. She is home. Hope the cat eating dogs decide they like her.

Aren't kittens fun? I have experienced the same issues of taking photos of kittens with Skor. For some reason, him rubbing the camera lens just doesn't make for a good picture!

So - who is going to win the name game with this little one?

Flea needs Cat. Or is it Cat needs Flea? Either way, sounds like a match made in Heaven.

Looks like a done deal. Now to neuter. She's soft too. Smart too - knows 5 soft touches.

I have always had a soft spot for stripey tabbies that purr. (They all do, don't they?) Simply adorable. Food and love make for a very nice kitty. Hope she stays ... and I vote for "Bella" though I believe the rescuer has first dibs on naming. ; )

Hi Flea, Thanks for stopping by. Your new found cat looks very much like the cat I had when I was a kid. We called her Calico, which seemed quite unique at the time. I like the fact that your cat has three or four names. Why not?

Your kids are awesome, Hunny included. I hope Bella/Twilight/KitKat has a better life than our poor Jackie Leggs did.

Sometimes your pets pick YOU...