At last! The sewing tutorial I promised! Today we start with the basics: our tools. I'm giving you the tools I use the most, every time I sew. We start with the cast of characters: 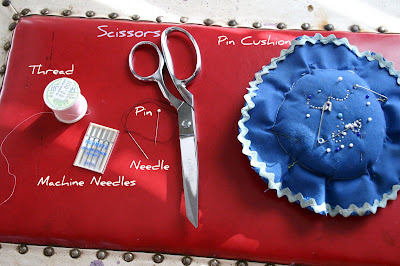 How simple is this? Thread, scissors, straight pins, hand needles, machine needles and the pin cushion! Because some of you seem a little less informed than others of you, I'm starting off with the basics. Check it out: 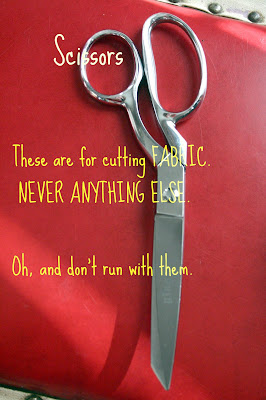 Because I love you and don't want you hurting yourself. The scissors are used for cutting around the pattern pieces. Not for much else. Stick your fingers in the large opening and your thumb in the smaller opening and have fun! But ONLY with fabric. A sharp pair of scissors are a seamstress' best friend. 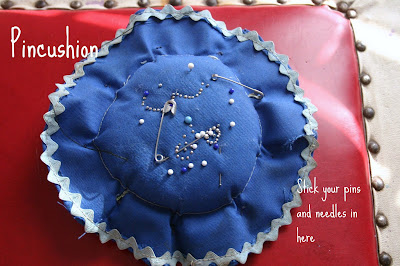 the pincushion, will hold these: 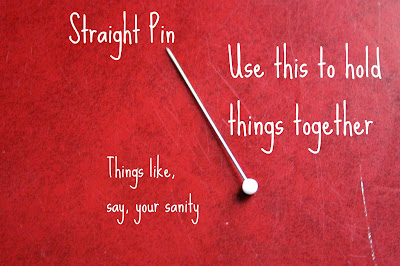 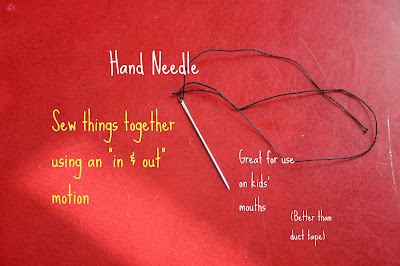 You'll need plenty of straight pins. I like to use primarily the glass head, steel pins. I do a lot of steaming with my lovely iron and the glass heads won't melt, the steel pins won't rust. Good stuff. The pins do several things, including hold pattern pieces to fabric, hold pieces of fabric together till you sew them together, and hold fabric to other things, like a blocking board. They also hold posters on walls, but NOT my glass head pins. Taboo, that is.

Last needle for today is the machine needle: 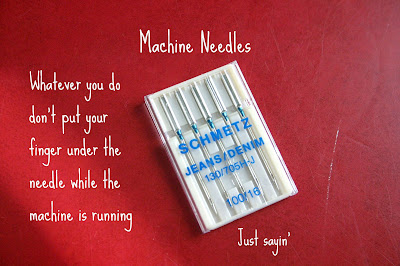 These are jean needles. The higher the number, the larger the needle. I use a 65 or 70 for heirloom work, or delicate fabric. And here's a tip for those of us whose vision is going: the number of the needle is written on it's shank. That tiny number is DANG hard to see, which can be a problem if you're taking one off your machine and can't remember what size it is. Put it in one of the needle cases and the cover acts as a magnifying glass. You're welcome.

What else do we need? think, think, think. Thread! I knew I was forgetting something! Here's a spool of pink heirloom thread: 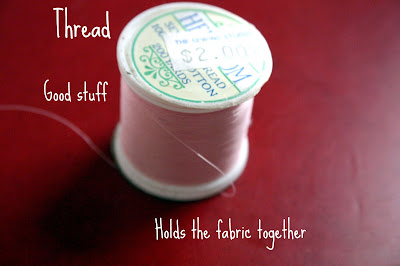 So there you have it. Tools of the trade. Next time I'll show you how to use them.

Email ThisBlogThis!Share to TwitterShare to FacebookShare to Pinterest
See? sewing

Those pictures would make AWESOME posters for someone's sewing room, or a craft/fabric store.

Oh... and while needle and thread might work better than duct tape....

Duct tape is significantly less messy. And less creepy when you look at them.

You need to teach Home Ec. I think my teenagers could actually sew if you taught them.

Very CLEVER! So Madame Sewing Genius why does thread sometimes wad up in the bobbin casing? AND if you say tension I'm gonna have a cow and mail it.
Tension doesn't help fix it!

PS so you actually sew the kids mouths shut? Can you get away with that in Tulsa? I just might move.

Coolness! I didn't know that thread had a grain, but now that you mention it, it makes sense.

Thread has a grain? No wonder I "sew" suck at things like this. Think of all the scout badges I've sewn on with my thread against the grain.
Thanks for the witty tutorial-- I will consider switching from duct tape now :-)

Think this is too funny. My mom was a home ec major. I was forbidden to ever enter the sewing room again after I used the sewing scissors on paper and then also on the majority of her fabrics. I "get" it mostly, but I was never taught.

CARP. That was me. Stupid control c.

Wow that was imformative.


Sewing their mouths shut. Never thought of that. Kind of gross to do though. I have blood issues.

My hair feels the same in both directions .. I am SO confused