Welcome to Funny Bone Monday, the Road Trip edition! Before we get started, I want y'all to pop over to Romancing the Road to visit with Rachel and her hot Comet. What a fab story! It's a video, for those of you reading this while working. *ahem*
While you're reading, I'm sleeping or driving. Sleeping because I worked all night. Driving (after noon), because I'm heading to Marcy's house! Then breakfast with Holly the Anglophile Football Fanatic, and on to my grandmother's in Louisiana!
Let's get on with it, then! 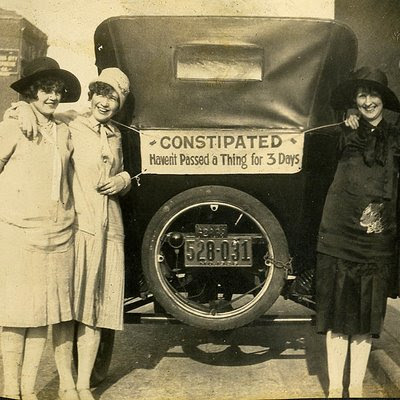 Pulls off at wrong exit.

Pulls off at wrong exit absolutely positive it's the correct one.

Finally rolls down window just to get fresh air

Gets three hot-dogs, a large slurpee, and beef jerky

Asks person behind counter how to get back onto the highway.

Gets back into car.

Laughs at the idea of looking at a map as he pulls away from the 7-11.

Drives down a dirt road with no street lights insisting this is the way back because guy from 7-11 said it was.

Drives and fiddles with radio.

Yells at you for suggesting the map again

Admits he didn't want to go to Thanksgiving at your sister's anyway.

He hates your sister.

Ever since she called him a pernicious weasel

He had to look up pernicious.

Seethes at the memory of it all

But she is laughing inside...

Write the words "Help me" on your back window in red paint. The more it looks like blood, the better.

Wave at people often. If they wave back, offer an angry look and an obscene gesture.

Hang numerous car-fresheners in the rear-view mirror. Talk to them, stroking them lovingly.

Keep at least five cats in the car.

Stop at the green lights.

Go at red ones.

Have conversations, looking periodically at the passenger seat, when driving alone.

At stop lights, eye the person in the next car suspiciously. With a look of fear, lock your doors.

One day he tried to make it in 1 hour. Collapsing on a hill from exhaustion, while sitting there, a Corvette pulls up and asks him if he needs a ride. The man looks at his watch and sees he would be late if not, but there is already a passenger, so he asks how?

"No problem," says the man in the corvette, "I've got a rope in the back and we'll tie your bike to the back bumper and you can ride."

They take off and the driver yells back, "Just yell BEEP BEEP if I'm going to fast." No problem the man thinks. They come to an Intersection and a Ferrari pulls up, the man's eye's widen in fright.

Sure enough, the light changes and THEY'RE OFF! Anyway, the guy made it to his brothers on time and the Vette lost.

Meanwhile, at the local police dept... "Hey guys the weirdest thing just happened to me. A Ferrari and a 'Vette just lost me at over 120 mph on Main Street."

"What's so weird about that?" asks the other cops.

The men stand behind the car, open up their coats and start exposing themselves to the oncoming traffic. One of the worst pile-ups in history occurs.

When questioned by police why he put two deviants along the side of the road, the man replied, "I broke down and was just using my emergency flashers!"
_____________________________________
The Policeman couldn't believe his eyes as he saw the woman drive past him, busily knitting. Quickly he pulled along the vehicle, wound down his window and shouted "Pull over!"

See ya next week, bloggy peeps! Unless I sneak over to my aunt's and use her hideously slow dial up. AUUUGGGHHHHHH!!!!!
Until I write again ...
Flea
Who wrote this? Flea When? 06:05

Thanks for another Funnybone Monday. You keep me honest at work. No sneeking a peek at this blog on the clock. Too hard to explain why I am snorting and choking as cartoons dance across my monitor. Travel safe!