As promised! The story of Maybelline's fractured wrist!

Remember Maybelline turning 16 a couple of weeks ago? I did tell y'all, didn't I? She's my first born, and now a full 16. She chose to go ice skating for her party, waiting till the Friday night of the last day of school for her big hurrah.

Unfortunately, the ice rink was closed for renovations. For the week. That week. Last week. So we went roller skating instead. See? 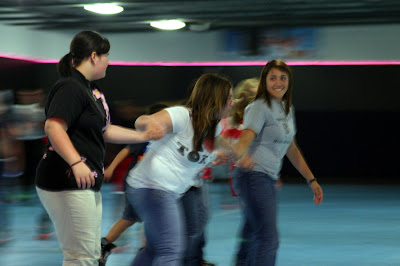 Maybelline had five friends along, only one who hadn't been skating much and was terrified. Can you tell? 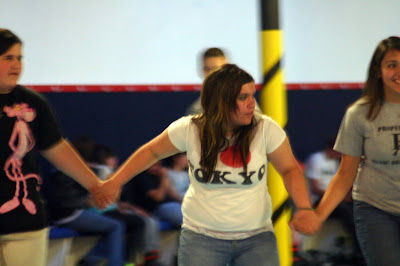 The bovines came along for fun. They seem happy to be home. But they thought it really stunk that I put them on shoe duty. I think it stunk that the lighting was so bad and my flash is broken. 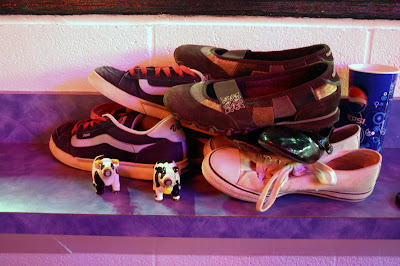 We had a drink at the snack bar. 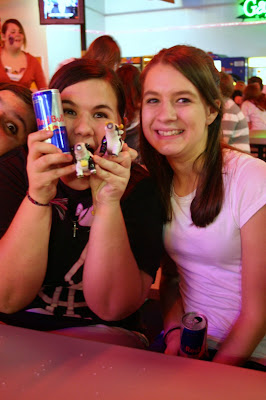 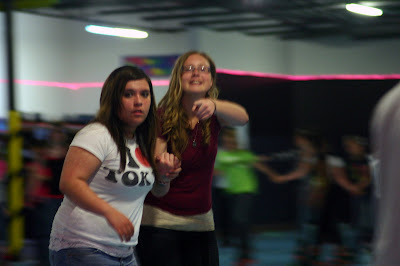 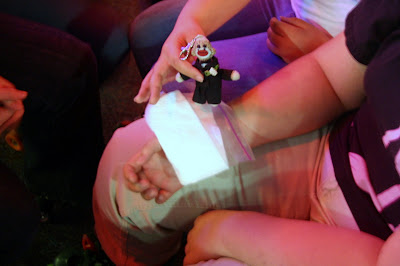 Then tragedy strikes ... Maybelline is body checked by someone on the rink and Mr. Monkeysuit does his best to console her.

Mr. Monkeysuit?!? At a roller sink, surrounded by pretty teenage girls? Who let him in here? 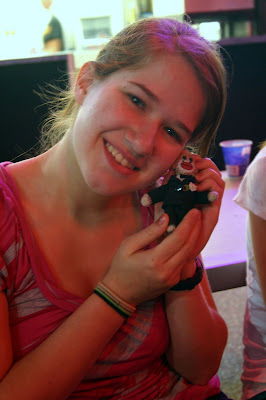 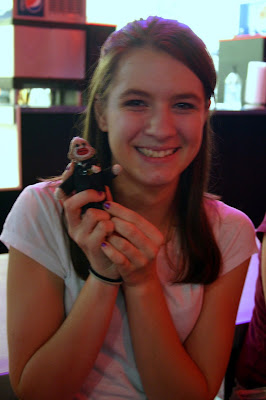 Friend M was a sucker for the suit. Who can blame her? All the ladies love that suit. 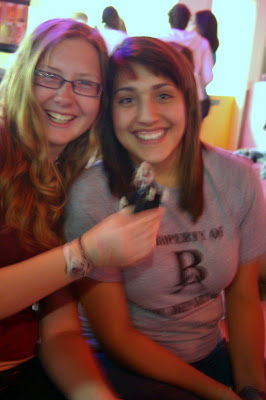 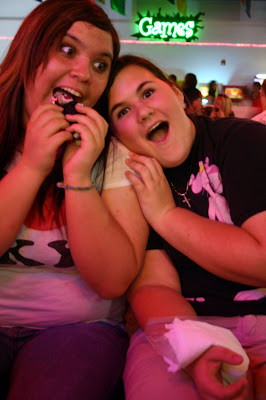 It seems that, delirious in her pain, Maybelline and H enjoyed Mr. Monkeysuit's company a little too much. I'm locking him up, y'all.

We kept Maybelline's wrist iced for about an hour, hoping it was a sprain and she'd do better. Every time she pulled the ice off, she'd yell with pain. So the girls called their parents to come and get them. We waited. I dropped off two of the girls. And friend H went with us to the ER, then spent the night. After we stopped at home to pick up some stuff do, books to read, paper and markers for H. Good thing. We were there from 11:30 till after three AM.

Here's Maybelline with her splint. 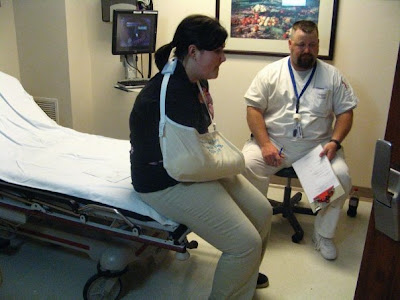 I wish I'd gotten a photo of the tech putting the splint together. Y'all, it was the coolest thing ever! He took two long strips of what looked like diaper fabric, but were really fiberglass, soaked them, then rolled them in a towel to squeeze out the excess water. Next he wrapped Maybelline's arm in some papery stuff, and laid a strip of fiberglass on top of her arm and hand, then one on underneath. He topped it off by wrapping the whole thing in Ace bandages. Then gave her a sling. It was awesome! See?

I mean, it was awesome except for Maybelline fracturing her wrist. And not being able to get the splint wet for four to six weeks. I'll be washing her hair for her for the next few weeks. Good thing she's out of school. No swimming the first half of the summer. Sucks to be her. No canoe trips either. And that week at the beach at camp? *sigh* Poor kid.

Y'all have a great hump day. Mr. Monkeysuit says so.

dang, I lost you for a while, been doin' that lately, misplaced CR for a few hours yesterday but he found his way home from the street corner.
Bless Ms. M's heart. My T. did the same thing at a roller rink. Your 16th year summer and you are high and dry? Sucks.

Yes, give her a big cyber-hug from me and a "Happy Birthday". The good news is that long after she forgets the lack of swimming, she'll remember her crazy Sweet 16 birthday story!

Waaaay better than mine. Snowed in. Doing a school project. A frozen clown with droopy balloons. Sigh. I guess I remember mine too (happy face).

Did I mention that those girls look like little ladies? Like, actual small adults? I can't believe you are her mother. Will that happen to my children????
Waaaaaaahhhhh!

What a pretty bunch of girls .. and it was good to have the cows and Mr Monkeysuit there to keep their spirits up ...

While she cant swim or wash her own hair, I think if you get one of those sucks the air out plastic bag kits you might be able to keep her arm dry enough so she can canoe and shower ...

Well, she'll never forget that birthday. Poor girl. At least she had access to ice and a clever mom that stopped to pick up entertainment items for ER. Did the bovines not get to go?

Give her a hug for me. Tell her to milk it for all it's worth. And get a coat hanger unbent because things are gonna get itchy in there!

Poor lamb....hurry up and heal Maybelline! And Happy Birthday;)

Poor thing. I never did like roller skating and never let go of the rail when I was a kid. My friend (many years ago) had a 30th birthday party there and the first guest fell, an adult, and broke both, not one, both of her wrists. Not good. Hope it heals fast.

Poor Maybelline. Hope you are on the mend soon and able to enjoy your summer.

Well . . .what a bummer! My eldest Elizabeth once broke her arm at a Bday skating party. A "backwards" skating game and a 6-foot man spelled doom for her poor arm whent he dust cleared. NOT FUN!!! Heal up quickly Miss M -- Summer's waitin'!! : D {{Prayers}}

Poor Maybelline! On the other hand, she'll remember that party forever.

She really knows how to show her friends a good time, huh? I never went to any parties where the birthday girl broke a bone :-(

This exact thing happened to my daughter at a skating party! Hers healed quickly; I hope Maybelline's does, too.

I can relate to the gimpie wrist/hand! Is she right handed? I'm still trying to adjust and have become quite ambidextrous. I just had my hair cut short because I was having so much trouble controlling the fro. Happy Healing, Mabe the Babe. Who can resist a tux on any species?

Awww, poor girl! Looks like fun up until the pain began, though!

Just what every girl dreams of for the big sweet 16 birthday, a splint, NOT. she is such a great sport. You better watch out for those bovines in dangerous places like that!
Seriously tell Miss Mabel, ( she is older now) that we all wish her a speedy recovery and are praying for her!

Poor kid, what a Sweet 16 to remember. She's got a great attitude about it though.

Make sure she gets physical therapy after the cast is off - I didn't and had a lot of trouble later.

My son Itai sends his own feel better wishes too - he broke his arm a few months ago so he can definitely sympathize.

On my reverse bucket list of things I have done but will no longer do Is roller skating. This is a good example of why. I only ice skated once and add cold to the hard and it was not something I will ever do again. Sorry to hear about the six weeks in a cast. MUD

Poor Maybelline! Who knew roller rinks were so violent?