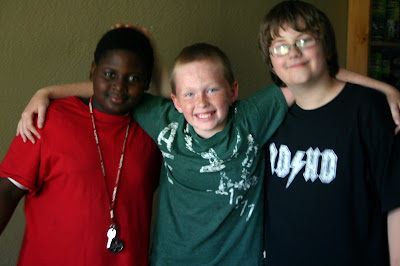 Red Rocks on right, in his birthday shirt, with his two best buddies
We went to the local water park the night of his birthday and spent three hours wandering while little boys played in the water. And rode the Atomic Wedgie. Alright ... it's called the Silver Bullet. But Red Rocks wouldn't ride (extremely tall water slide) and one of the dads gave him the ultimatum, "You're getting a wedgie tonight one way or the other - your choice." He was the last one on the ride that evening. And loved it.
And now my baby is going away to camp for the first time. Am I all weepy and nervous? C'mon - y'all know me better than that. I'm helping him pack his stuff and waving bon voyage. He's headed to Boy Scout Camp on Sunday, working on his horsemanship, electricity and astronomy merit badges. Shoot, I'm jealous.
So you'll excuse me if today's post is brief? I must be off to shop for closed toe shower shoes and red cellophane.
Until I write again ...
Flea
Who wrote this? Flea When? 07:40

I feel like I have watched him grow so much! What fun camp will be;)

Happy Birthday to the Tween-Ager. Hope he has a great time at camp -- sounds wonderful!

Happy birthday! Where does the time go?

Hope he (and you) have a lovely time while he's at camp.

Happy Birthday wishes to Red Rocks. Sounds like a fun time at the water park and great times to come at Camp. Enjoy all the summer activities!

Best wishes for all those adventures. We took our guys to one of those monster water parks. I even took a ride on the Wedgie and the Melvin. But I refused to take on the Toilet Flush. The guys looked like they had been beaten severly about the head and back by the end of the day, but they loved every minute. Cheers!

I had a love/hate relationship w/GS Camp .. but then I am and always have been a whiner

Wow, twelve! Cool and scary all at the same time. I'll bet he has a blast at camp. I used to go for 4 weeks and bitterly resented it that my parents wouldn't send me for the whole eight.

PS My 8.5 year old is being an incredible pill tonight. Any chance RR would like to take him with him to camp with him?

Oh bless your heart, I wasn't even there for you at such an emotional time.

The story about the wedgie is priceless. Happy camping RR!!