Bloggy friends, I need your help. I'm hoping that you remember the McDonald's post in May? The one where I was in a hurry and was upcharged, then treated like an idiot by the manager? It happened again. 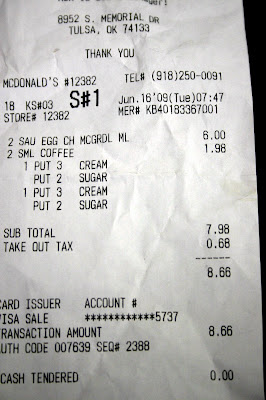 I know it's only 20 cents a meal. It's not about the money. See my receipt? The meal on the menu was 3.79. The total came to 3.99 per meal. See how the drinks are broken out separately from the meal? This is about deception, plain and simple. Hundreds of meals a day at 20 cents adds up. It's a lot of lying.
I know that's a lot of cream and sugar for small coffees. Hush.
I didn't have time to ask for the manager, since I was already late to meet someone. What I did instead was to call the 800 number on Mickey D's website. Some kind lady typed away while I talked. The next morning the phone rang and it was the supervisor for my local store. Yes, Margo, it's the cute retro McDonald's near my house. The one that's so convenient when we're running late. The one I haven't been to since the first debacle. The one at the corner of 91st and Memorial in south Tulsa.
In May, the meal was a Friday night Quarter Pounder meal. I tried a breakfast meal this time, thinking maybe it was the manager training his shift to upcharge. No. Not.
The supervisor who called was very vague. She asked a couple of questions, then stated that she just wanted to make sure I was satisfied, like she was done with the conversation. She even said something about the drinks intentionally being separate on the receipt because of some dollar value thing they're doing. So I asked if that wasn't why I was being charged 20 cents more per meal. That's when she offered me the coupons, I think.
No, I wasn't satisfied. She was very vague about what would happen. I think that this is something this store does on purpose and covers up the best they can.
Here's where I ask for your help. Next time you find yourself in a McDonald's drive thru, would you please pay attention to the price of the value meal you're ordering? Then check your receipt. See if you're being charged separately for drinks and if it totals more than the board price? Then let me know.
I'll update you when I get the coupons. I might even give them away if one of you finds the same thing happening at your local McDonald's. If you do, photograph or scan the receipt and let me know the original meal price. Do yourself a favor and call the store and the corporation. This is just wrong. I'm hoping it's only this one store.
Sorry to rant. There's not much I hate more than this kind of deception, preying on others in tiny ways. Adding up the lies and making money while it happens.
Until I write again ...
Flea
Who wrote this? Flea When? 05:39

I don't do McDonalds unless I'm on my way to a hike or a day of fishing. But I'm not surprised at how they're calculating this. I mean how many people look at a fast food reciept? And what's with the "takeout tax"?

I don't do McDonalds at all anymore. I ate it in highschool, but seems like as an adult, everytime I eat something from here I get an upset stomach. Maybe my adult stomach can't handle all the grease....

I cannot do Mickey D's, but that is some ridiculous stuff. I think a well-written editorial is called for....

I remember the May post. Seriously.....they did it again? I think I would be calling back the 800 number. I go to the Arches once week. My son asks for it from sun up till bed time. I will watch very carefully.

I actually think they can get in trouble for charging differently on the receipt than what is posted on the board.

They are supposed to charge what they have posted. Otherwise, I think it's false advertising. Sounds like a complaint with the Better Business Bureau should be on tap.

I'm going to check it out tonight.

I've done the same.....it's the principle. I AGREE! We've called on our phone bill (for all those weird charges and said we don't want to pay for them) and others. McD's may have been one of them. ;) Mongrels stealing our money!

Talk about corporate greed at the local level!

I will totally check mine. I am there once a week. Will let you know.

Hi Flea! Makes you wonder how often this happens at other establishments, too. I try to watch pretty carefully -- I've seen too many mistakes just to assume that the ticket is right.

Oh, dear. I'm so sorry. Good for you for following up on this, though. Sad that we have to keep on our toes regarding deceptive business practices.

WHAT?! Again? We never buy value meals, just single items, but I'm tempted to drive through and get one just for a test. I hope it's just that one store (which would suck for you) because if McD across the nation is doing this crap I think a whole lot of consumers should know about it.

Glad you shared. I'm usually so distracted by the kids I never look! I will be for now on!

happens here all the time... we only get 1 dollar ice tea and ice cream cones now... no meals ever..

Again? That's terrible. Have to think they are doing it on purpose...

Our local paper had a bit article on how bars..even upscale ones...were upping your tip thinking you wouldn't notice...

I dont think I have been in or driven thru a McD's in a lifetime but I am sure proud of you for reporting this and not letting them continue to get away with this.

IMO what truly sucks is they are all about helping out by selling these bargain $1 items but they arent, are they, no they're about sneaking in extra penny-ante charges which add up ..

I will pay attention. To be honest, by the time we get our receipt it's as long as my arm, but I have looked at it suspiciously wondering why everything is broken up if they're offering it as a combo deal... I bet I've been over paying the whole time. Now my wallet bear is getting defensive.

I am actually just the tiniest offended by the assumption that the employees are knowingly stealing from you.

Seriously having worked at McDonald's for way to long to mention I can honestly say that it would never have occurred to me to check the prices on the register against the menu board. I didn't question the way I was taught to ring up orders.

Also with a little insider knowledge I can say the price issue isn't with the drinks its with the meals. The meal should be discounted so that when adding the drink it rings in correctly. That way you can get the drink you prefer with the meal. If you want a more expensive drink then the coffee or the larger coffee you get the up charge there.

Am I making sense or just rambling? So in reality it isn't the cashier who is responsible at all but rather the person who programmed the registers with the prices. Most likely the jerk manager.