Y'all, I spent a few days with my favorite sister-aunt this week. I gotta tell ya - she's stressed. See this face? 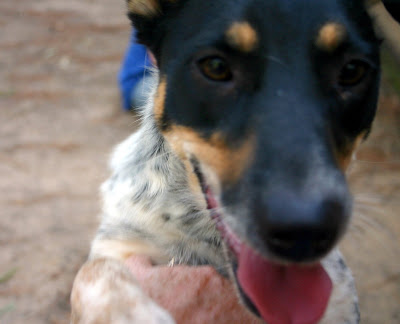 That's Pepper. Pepper found my aunt and uncle about a year ago, but she's been the source of strife between them and their neighbor. It's believed she's a Blue Heeler, or Australian Cattle dog. She'd be great in agility trials if she were trained. Isn't she a beauty? 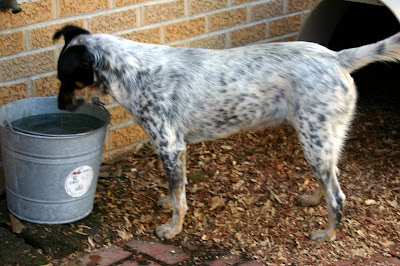 Pepper needs a good home. I'm hoping that one of you out there will know of someone who's looking for a dog just like her. Someone with a little room for her to run and play. See her hanging out with Red Rocks? 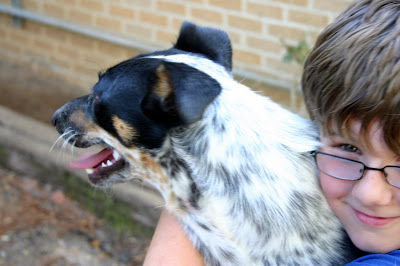 He was rolling around on the ground with her. Ew. She's awfully sweet, though. 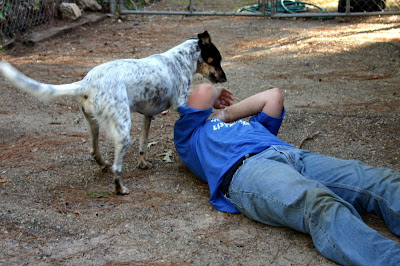 Pepper is only a little over a year old. She loves to play with balls and the large bouncing ball seems to be her favorite. She bounces like a rabbit next to it. But she's afraid of water, of all things, though I don't think the issue has been pushed. And FULL of energy, which is normal for a herding dog under the age of two anyway. 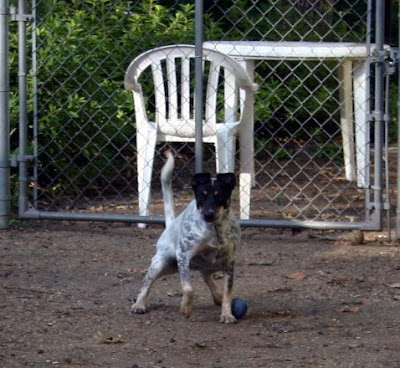 I'm praying someone out there will know of the perfect home for Pepper. The shelters and rescue organizations near my aunt seem to be full of homeless puppy litters at the moment and she's at wits end. As well as heart broken. She's truly in love with Pepper. 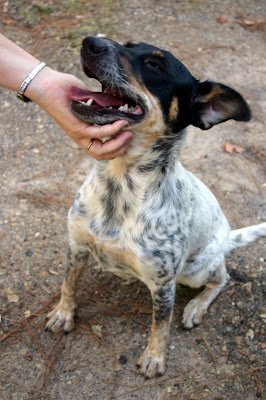 Y'all let me know? My email is fleabyte@gmail.com. Thanks!
Until I write again ...
Flea
Who wrote this? Flea When? 10:19

Oh Flea, she is adorable! I would love to scoop her up, up, but three dogs is enough!

I hope you find a home for her.

You should email Annie;) Where is Pepper?

Aw I sure hope she gets a new home soon

i like her and would take her in a second but the trip toget her here is way too much... plus mike would KILL me. she is darling.

What a great looking dog!

Wishing you good luck with Pepper! She looks like a darling dog.

Oh, I hope she gets a new home soon!

They're having a terrible time over here with the credit crunch. People can't afford to care for their dogs, so they're taking them to the shelters who have seen a huge reduction in donations. so sad.

You know, Snooty's son is a sucker for a dog (unfortunately he tries to unload onto Snooty but maybe she wouldn't remember that part...)

your just killin me doesn't Pioneer woman live out there? she's got room for another cute dog.
I wnet through that with me husband but in the end the dog won him over.
It took awhile.

Maybe my sister will check in Flea - she may know of a ACD rescue org who could rehome her. Hope they find a new place for her.

Too bad you guys are so far away - and we're moving soon. We'd love a dog like that. My husband wants one that is high energy enough that he can go running with the dog 4 mornings a week (5 miles). Good luck!

Those smart, energetic dogs are a real blessing for people with room and a job for them to do, but can be a challenge if not kept busy.

I was thinking the other day that a herding dog would be great for daycare situations.