To Texarkana and Beyond!

Let's see if I can't wrap up the end of my trip in one post. I think I can do it!
I'm skipping Thursday. No photos. And no fun stories. Thursday we loaded a riding mower into the back of the truck (cute little thing) along with its accesories - grass bag, tiny trailer, raking attachment. We were shocked it all fit, but pleased to get it in. And strapped down. I'm stronger than I look.
Friday morning early we left central Louisiana. Headed to Texarkana. In my head I'm hearing, "So we loaded up the truck and we moved to Beverly - Hills, that is." As it was, we listened to country music most of the trip home. Oh, I say "we" quite loosely. Red Rocks had his iPod on and pillows over his ear buds so as not to hear my music. He took great exception to "It's Okay to Be a Redneck". "Good Brown Gravy" drove him crazy. He really should have brought his iPod charger, as he was forced to sleep to escape the music after a couple of hours. Heh.
And then! Fiesta House near Texarkana! Mmm! Karen, over at Simply A Musing blog, certainly can pick good food! She also sprung for lunch. Thanks Karen! It was yummy. And she brought her oldest child: 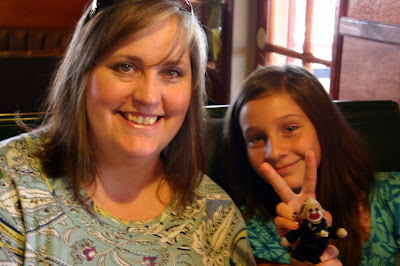 Isn't she just the cutest thing? She and Red Rocks are the same age and got along well. They played air hockey with straw wrappers after lunch and I thought Karen was going to die laughing. 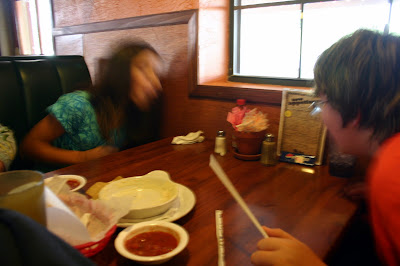 And of course Mr. Monkeysuit had a great time. He wanted to take a siesta (Mr. M's not fond of country music, either), but I made him pose with the locals instead. 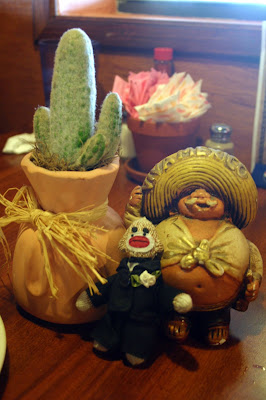 Know what? I'm tired. I think this is where I'll end this post. I had a great time with Karen. Loved listening to Red Rocks quote Weird Al lyrics on the way home. Had a fantastic time with my aunt, uncle, grandmother and sister. And am worn out just thinking about it all.
Until I write again ...
Flea
Who wrote this? Flea When? 06:08

I am worn out too .. all that traveling is fun but its nice to be able to sleep in my own bed .. oh wait, I didnt really go with you did I .. it felt as if I did

Ah, Mr. Monkeysuit and the locals. Love that guy!

So many laughs!! Glad you had a good trip, and that the mower made it safely home. Mr. Monkeysuit seems to have gotten the best end of the deal, what with all the cool people he met and the free vacation! I suggest you make him do some chores or something to earn his keep Being photogenic only goes so far. :D

It sounds like you had a wonderful time! And meeting new bloggy friends IRL is simply the best!

Glad to hear that your trip ended on a great note. Glad you are home safe too!

Glad you had a safe trip, but I was enjoying traveling with you. You really ought to come north next time =).