The Hunny and the Clown

It's always a fun time in Casa de Pulga. Okay, not when Red Rocks had the flu, then the Good Flea had a killer sinus infection, then Maybelline came down with it. But usually. Alright, maybe just sometimes, then.
There's this clown, see. Friend Heather and I got it at the same time and place (Salvation Army) we picked up the dog figurine (don't forget to read and vote! Voting is in the top right corner). See this clown? He's going to be the subject of a monthly writing contest in the future. If he lives long enough. 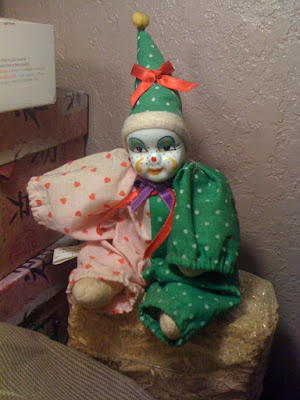 My Hunny hates clowns. HATES them. There's a word for that. Coulrophobia. Yeah. He's got it. Me? I love clowns. I watch all the wrong kinds of movies, evidently.
So this creepy little clown has been left all over the house the last few weeks. On the fireplace mantle. Atop the china cabinet. Top of the clock. Mirror shelf where Hunny hangs his keys. Someone has been leaving it places. Hm. I wonder who that could be?
Last week the wee clown was left in the Hunny's closet, sitting on the top shelf, staring down at the Hunny. It sat there nearly a week. One morning this week, while getting dressed for work in the dimly lit bedroom (so I could sleep), the Hunny discovered the clown. Staring at him. With its evil grin.
Next thing I knew, I was being assaulted. Something hit me square in the back while I was sleeping. I thought the Hunny was throwing socks at me and I started to fuss. Then I saw the clown. Mwahahaha!
I really hope my Hunny doesn't read my post today. I tucked the clown away in the bottom drawer of his dresser. A drawer he won't really open till the weather cools a little more. And he's had time to forget the clown. Heh. Yes. I'm evil.
Until I write again ...
Flea
P.S. Red Rocks just informed me that he had moved the clown prior to the Hunny's discovery. RR didn't think the shelf was appropriate - too obvious - so he stuffed its feet into Hunny's jacket pocket. It was standing and staring at him. Heh.
Who wrote this? Flea When? 05:51

I'm not seeing the humor, but I'm more in Hunny's camp on this one. Clowns are freaky.

I don't like them much either, but I am so excited for the next installment of this saga!

Evil personified . . .
Funny though! Please don't forget to let us know where the clown ends up next!

I was LOL@ this entire post!!! guess i have a sick/evil sense of humor?

My cousin is profoundly terrified of clowns. I thought it was just crazy her. Obviously not. Didn't realize this fear is a far-flung one.

Is it cool enough??? What happened next???

shivering here-- that is one creepy little thing. I watched WAAAAY too many horror movies as a child. I do love your family's sick sense of humour though.

I'm so sorry you have been hit by the winter nasties already!!

BAHAHAHAHAAA!! Flea, you are one wickedly evil, hilariously funny human. Remind me never to cross you. LOL

You people are mean.