Welcome to Funny Bone Monday, the Bacon edition! Do you know how difficult it is to find decent bacon humor on the internets? Gah! What I do for you, my bloggy friends. Mwah! Enjoy!
***************************
A farmer had five female pigs and, as times were hard, he had determined to take them to the county fair and sell them. While at the fair, he met another farmer who owned five male pigs. After talking a bit, they decided to mate the pigs and split everything 50/50. The farmers lived sixty miles away from one another and so they agreed to drive thirty miles and find a field in which to mate their pigs. The first morning, the farmer with the female pigs got up at 5 AM, loaded the pigs into the family station wagon, which was the only vehicle they had, and drove the thirty miles. While the pigs were mating, he asked the other farmer, "How will I know if they are pregnant?" The other farmer replied, "If they're in the grass grazing in the morning, then they're pregnant, if they're in the mud, then they're not." The next morning they were rolling in the mud, so he hosed them off, loaded them again into the family station wagon and proceeded to try again. This continued each morning the following week until one morning the farmer was so tired that he couldn't get out of bed. He called to his wife, "Honey, please look outside and tell me if the pigs are in the mud or in the field." "Neither," yelled his wife, "they're in the station wagon and one of them is honking the horn."
Found this one here
***************************
A guy walks into a doctor''s office. He has a sausage coming out of his ear, a waffle coming out of his nose, and bacon coming out of his other ear. He says worriedly, "Doc, what''s wrong with me?!?"
The doctor replies, "You''re not eating properly."
That made me laugh. Found it here.
***************************
Bacon jokes are hard to come by, but here are some of my favorite bacon products (some I haven't tried but want to): 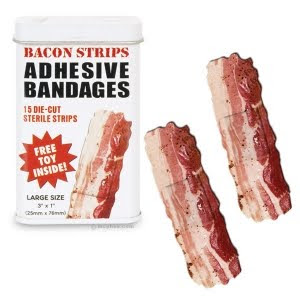 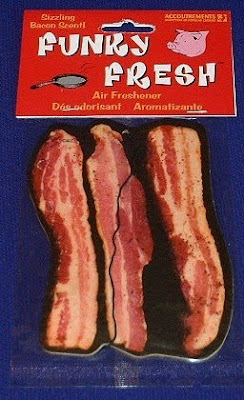 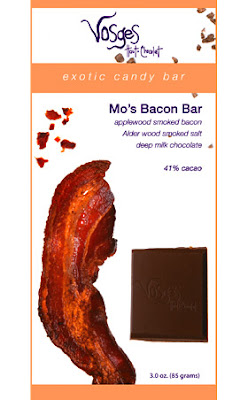 And now I want a peanut butter and bacon sandwich. Thanks.