Welcome to Funny Bone Monday! Today's topic comes courtesy of one of the patients at work. She's a stitch to know, but this one surprised me. Her new beau took her out to the shooting range this weekend and taught her to use a gun and she LOVED it. It was the cutest thing, watching her dance around the desk holding the paper human targets, riddled with holes. Reminded me of something from My Fair Lady. Except with bullets.
So yes. Today's topic is gun humor. C'mon, people - I live in Oklahoma. We may not be the redneck capital of the country (I'm not getting myself into hot water by venturing a guess as to which state that is), but we're kissin' cousins with it. Why, two months after we'd moved here from Orlando, we got lost out in the sticks. We were hoping to stop at someone's home and ask directions. Till we saw a bullet-riddled sign which said, "Don't Shoot Over the Road". I think I heard banjos.
So, without further ado, I give you gun humor Monday.
******************************
From Tucson Shooting, these gems:
At the police station, Bubba explained to the police officer why his cousins shot him. "Well," Bubba began, "We wuz havin' a good time drinking, when my cousin Jed picked up his shotgun and said, 'Hey, der ya fellows wanna go a huntin'?'" "And then what happened?" the officer interrupted. "From what I remember," Bubba said, "I stood up and said, 'Sure, I'm game.'""
Why Some Men Favor Handguns Over Women
#10 - YOU CAN TRADE AN OLD 44 FOR A NEW 22.
#9 - YOU CAN KEEP ONE HANDGUN AT HOME, AND HAVE ANOTHER FOR WHEN YOU'RE ON THE ROAD.
#8 - IF YOU ADMIRE A FRIEND'S HANDGUN, AND TELL HIM SO, HE WILL PROBABLY LET YOU TRY IT
OUT A FEW TIMES.
#7 - YOUR PRIMARY HANDGUN DOESN'T MIND IF YOU KEEP ANOTHER
HANDGUN FOR A BACK UP.
#6 - YOUR HANDGUN WILL STAY WITH YOU EVEN IF YOU RUN OUT OF AMMO.
#5 - A HANDGUN DOESN'T TAKE UP A LOT OF CLOSET SPACE.
#4 - HANDGUNS FUNCTION NORMALLY EVERY DAY OF THE MONTH.
#3 - A HANDGUN DOESN'T
ASK, "DO THESE NEW GRIPS MAKE ME LOOK FAT?
#2 - A HANDGUN DOESN'T
MIND IF YOU GO TO SLEEP AFTER YOU USE IT. And, the number one reason a handgun is favored over a woman...
#1 - YOU CAN BUY A SILENCER FOR A HANDGUN !!! "
A woman goes into a sporting goods store to buy a rifle. "It's for my husband," she tells the clerk.
Did he tell you what caliber to get?" asked the clerk."
"Are you kidding?" she says. "He doesnt even know that I am going to shoot him!" "
******************************
Doctors
(A) The number of physicians in the U.S. is 700,000.
(B) Accidental deaths caused by Physicians per year are 120,000.
(C) Accidental deaths per physician is 0.171.
Statistics courtesy of U.S. Dept of Health and Human Services.
Now think about this:

Please alert your friends to this alarming threat. (bwhahaha)
We must ban doctors before this gets completely out of hand!!!!!
Out of concern for the public at large, I withheld the statistics on lawyers for fear the shock would cause people to panic and seek medical attention!
From Gun Humor
****************************** 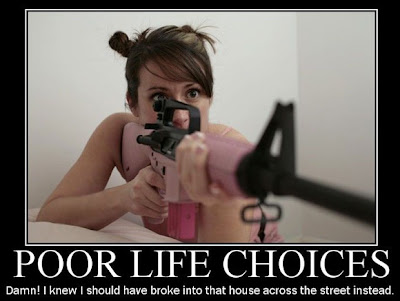 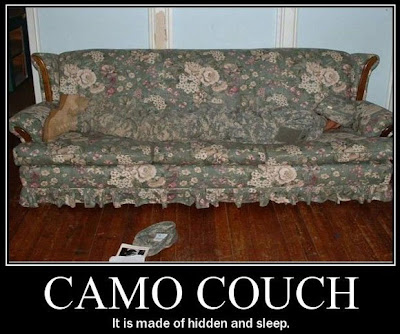 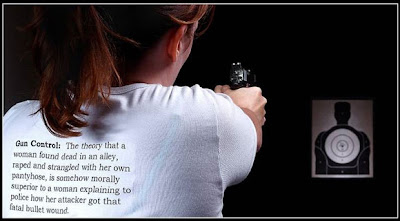 Good timing! Hubby just told me yesterday that my mother-in-law and brother-in-law had gotten guns for themselves! Yikes! I don't think I will be visiting them again with those in the house!

HEHE, I agree with most of those! Thanks for the giggle Flea!

awesome shot... and FRED (my paper target ) hangs on the back door... its an excellent conversation peice and when people realise I am who is so deadly accurate.... well... attitudes change :)