10. In the Star Wars Universe weapons are rarely, if ever, set on "stun".

9. The Enterprise needs a huge engine room with an anti-matter unit and a crew of 20 just to go into warp -- The Millannium Falcon does the same thing with R2-D2 and a wookie.

4. Luke Skywalker is not obsessed with sleeping with every alien he encounters

3. Jabba the Hutt would eat Harry Mudd for trying to cut in on his action.

2. The Federation would have to attempt to liberate any ship named "Slave I"

Luke and Obi-Wan are in a Chinise restaurant and Luke's having trouble.
Finally, Obi-Wan says, "Use the forks, Luke."

Two Gamorrean guards are walking down a narrow, deserted canyon when suddenly a Krayt Dragon comes out and starts chasing them.
One of the Gamorreans stops to put on his best running shoes.
"Don't waste time," shouts the other one, "you can't outrun a Krayt Dragon with those!"
"I don't have to outrun the Krayt Dragon," says the first one as he finishes lacing his shoes, "I just have to outrun you!"

"What's the difference between a lightsaber and a blaster?"
"I don't know."
"You'd be a fine one to send after my lightsaber."

Yoda and Obi-Wan walked into a bar and bought a 5 dollar drink.
Yoda, seeing that he only had 4 dollars asked Obi-Wan, "Have a dollar do you? A little short I am."

Two droids were talking.
One says to the other, "Did you beat the Wookiee at Dejarikk?"
And the other answers, "Yes, but it cost me an arm and a leg."

One day Luke gets fed up with life as a farmer so he goes to see Old Ben the local magician.
Luke: Ben I'm really fed up being a farmer can you turn me into something else?
Ben: Like what?
Luke: Well I guess it would be cool to be a Dewback.
Ben: Ok but only if you're sure.
Luke: I'm sure all right but let me go off and have one last drink as a human.
Luke goes off to have his drink.
Owen and Beru are getting worried so they go and see Old Ben to see if he knows where Luke is.
Owen: Hey, Ben, have you seen Luke today?
Ben: Yes. He's gone for a drink but he won't be Dewback until later.

Q: How is Ducktape like the Force?
A: It has a Dark Side, a Light side and it binds the galaxy together.

Q: What's the differance between an ATAT and a stormtrooper?
A: One's an Imperial walker and the other is a walking Imperial.

Q: How many Sith does it take to screw in a hyperdrive?
A: Two, but I don't know how they got in it.

Q: Why should you never tell jokes on the Falcon?
A: The ship might crack up.

Q: Which Star Wars character works at a restaurant?
A: Darth Waiter.

Q: Why do Doctors make the best Jedi?
A: Because a Jedi must have patience.

Q: What did the rancor say after he ate a Wookiee?
A: Chewie! 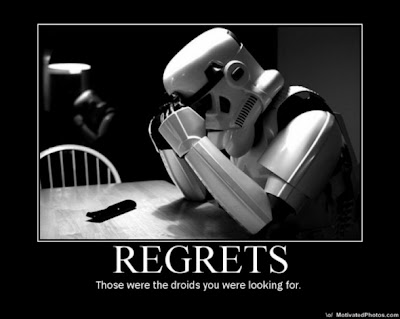 Woohoo! :D I'll have to pass these on. Remind me to tell y'all about Star Wars: In Concert when I come visit for Thanksgiving.

The men in this house have been obsessed with Star Wars from day one, so I'll have to send this to them. Thanks!

We love some Star Wars around here and it is so fun to pass on the obsession to our offspring! We just painted Aron's room and it is going to be Star Wars themed when we are done. Gonna mount his light saber to the wall above his bed and everything!
And the 'Regrets' with the storm trooper who let the droids go by is my favorite Star Wars joke!