Welcome to Funny Bone Monday, where the humor is borrowed, but the smiles are all original! Today's FBM topic is Ninjas! One of Oatmeal Head's and Red Rock's favorite topics. I might throw in a little Chuck Norris humor. Because I can. Shut up! I said I can, it's my bl... sorry. Let's get to the jokes, shall we?
*************************
Ninjas are stealthy buggers. There's not much humor out there, it seems, because they kill those who mock them. Here's a visual for your trouble, though. 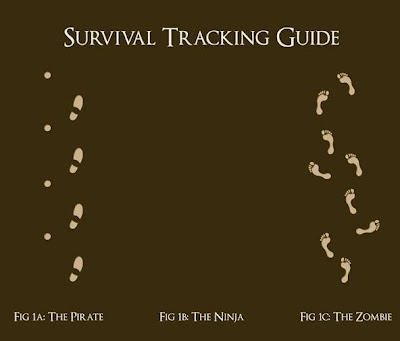 * The Fart of a Ninja is a million times deadlier than the venom of a rattlesnake. With the right wind, a single fart can wipe out a small village.

* Only a ninja can kill a ninja. Regular humans are useless against a ninja.

* Ninja never wear headbands with the word "ninja" printed on them.

* Ninja can change complete wardrobes in less than 1 second.

* Ninja don't smoke, but they do use smoke bombs.

* Ninja invented the internet. All of it.

* Ninja don't eat or drink very much, and they never have to go to the bathroom.

* Ninja always move to America when making a new start as a non-assassin.

* Ninja don't play sports. Unless killing is a sport. They always win.

* Ninja can crush golfballs with 2 fingers, any two fingers.

* Ninja have a bad temper when they lose at anything. They will usually cut off the winner's head before they have time to brag.

* Ninja lie all the time. Even when the truth serves better, ninja will lie anyway.

* Ninja swords are always straight with a square handle guard. Always. Curves are for girls.

These gems were found at PinkJokes
*************************
And because Chuck Norris is better than the average Ninja:
Chuck Norris' tears cure cancer. Too bad he has never cried.
Chuck Norris does not hunt because the word hunting infers the probability of failure. Chuck Norris goes killing.
Chuck Norris sold his soul to the devil for his rugged good looks and unparalleled martial arts ability. Shortly after the transaction was finalized, Chuck roundhouse kicked the devil in the face and took his soul back. The devil, who appreciates irony, couldn't stay mad and admitted he should have seen it coming. They now play poker every second Wednesday of the month.
Chuck Norris built a time machine and went back in time to stop the JFK assassination. As Oswald shot, Chuck Norris met all three bullets with his beard, deflecting them. JFK's head exploded out of sheer amazement.
Chuck Norris has already been to Mars; that's why there are no signs of life there.
Chuck Norris knows where Carmen Sandiego is.
China was once bordering the United States, until Chuck Norris roundhouse kicked it all the way through the Earth.
Chuck Norris once tried to wear glasses. The result was him seeing around the world to the point where he was looking at the back of his own head.
Chuck Norris frequently donates blood to the Red Cross. Just never his own.
These were all found at (shhhh!) The Chuck Norris Facts
*************************
The video ... I'll start y'all out with Ninja auditions. Sad, but funny.
Seriously? They didn't practice at home first even once?
This little fella is too cute for words. Which is good, since I don't speak ... whatever language that is.
Bwahahaha! This one just made me chuckle.
Finally? Duh! Ask a Ninja!
Until I write again ...
Flea
P.S. Rabbits!
Who wrote this? Flea When? 05:26

Stop you are killing me

LOL What a great way to start off the week! Have a good one. :)

Ninja farts killing whole villages? Now I know what's wrong with the people I live with.
Kettle? No worries mate. I use an electric one. Did you have someone who is a cow lover that really wants to have it? If so pass it on..with love.

Ouch, funny boned! That is kinda like a brain freeze. ".."