2. Owed money to Jabba the Hutt, could refinance debt through the Empire

3. Wanted to use the Force to prop up Chrysler stock

6. Kicked in head by bantha

7. To impress the babes

9. Sick and tired of mentor Obi-Wan Kenobi reciting lines from "Bridge over the River Kwai"

10. Generous Dark Lords of the Sith pension plan
Q&A
Q: When did Anakin's Jedi teachers know he was going bad?
A: In the Sith Grade.

Q: How is Ducktape like the Force?
A: It has a Dark Side, a Light side and it binds the galaxy together.

Q: What's the differance between an ATAT and a stormtrooper?
A: One's an Imperial walker and the other is a walking Imperial.

Q: How many Sith does it take to screw in a hyperdrive?
A: Two, but I don't know how they got in it.

Q: Why should you never tell jokes on the Falcon?
A: The ship might crack up.

Q: Which Star Wars character works at a restaurant?
A: Darth Waiter.

Q: Why do Doctors make the best Jedi?
A: Because a Jedi must have patience. 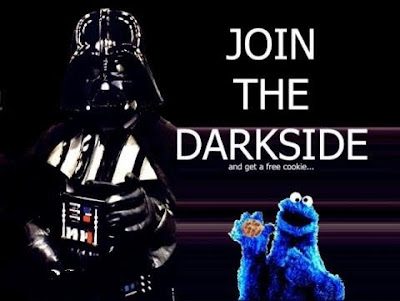 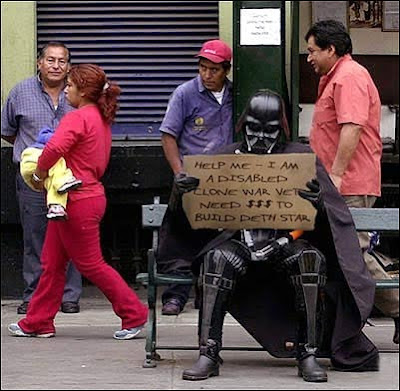 You will probably be happy to hear that you don't have to sign me up for rehab just yet, but I must confess that I did "inhale". :P

The Yoda song is better tha the Lola song! That could go viral....

Yes, I have the Star Wars complete collection and the Alien Legacy. I don't watch it every weekend but probably once a year I dig them out and watch. MUD

Too funny or just funny enuf .. no matter I laffed a lot

LMAO! LOVE the list! LOVES it! so needed the giggle today...laughter it's good medicine!

You are sick. You're welcome.