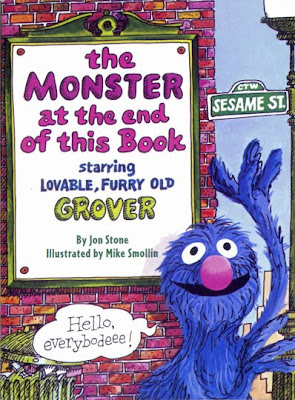 It was so tough to choose a book for today's review! Seriously? I was tempted to review There's a Monster at the End of This Book. You know, the one starring Grover from Sesame Street? Especially since Grover's recently been rocking the internets with his new video. If you haven't already seen it, check it out:
Alas, I told you all I'd review something more adult, so adult review I must do. Here goes -
Bag of Bones. By Steven King.
What?!? Really, I read this! I did. First, see, I tried reading Cell a couple of years ago. It sucked. I got halfway through and thought that my first attempt at King would be my last. Vulgar and violent and totally pointless. Tacky. Next, while I was working nights at the psychiatric hospital, I gave Pet Semetary a go. Got all the way to page 87 at about three a.m. Couldn't do it. Dim light, wee hours of the morning, psych hospital, things coming back to life which shouldn't ... uh uh. Nope. Gave it to a patient.
Eventually I gave King another shot. Horror has NEVER been my genre, but people kept saying that the man is a genius, and I read On Writing, which convinced me maybe he IS a genius, so I tried again. This time it was Bag of Bones, less horror, more story. A great ghost story.
Completely unlike Cell, this book is complex. The characters have depth. I cared about Mike, Mattie and little Kyra. I even took to Jo, Mike's long dead wife. Too much, actually. And the dark twists that the book take remind me of some deep southern writing, despite its Maine setting. The lake house freaks me out, but I love it. I can relate to the people in the small town nearby. And the nature of the ghosts - *shudder* awesome.
I never thought I'd say it, but I like a Steven King novel. I might even attempt to read another one. Any suggestions? And don't even THINK about Cujo or It. The Dead Zone's on the shelf, though. Yes? No?
Until I write again ...
Flea
Who wrote this? Flea When? 06:23

The Dead Zone was quite good. I think The Stand was his best work ever. I gave Mr. King up after the Shining. No can do!

The Monster at the End of this Book was my FAVORITE when I was small. :) I too have read a couple of King novels and decided I'd rather just watch the movies instead.

Ah, go for the older stuff--and the short stories. His newer stuff is just freaky-weird, and I don't bother with it.

From a Buick 8 is a cool book, but more about how ordinary people cope with the scary-unusual. Hearts in Atlantis is good--not so much freaky, but suspenseful.

Recently I read Under the Dome. Seriously, a good book. I prefer his suspense more than the horror, and the in-yer-head stuff more than the freak-horror.

love the monster at the end of the book!
love steven king his best book ever is the green mile!

STEPHEN King is an awesome writer but I am not into short stories, I always feel cheated