Goof Ball has gotten in on the clown act. Initially my most tender hearted teen took pity on his dad and attempted to thwart my every effort to traumatize my husband with clowns. Eventually I got the boy to see that the clown hidings were all in good clean fun.

He's joined in with a vengeance. 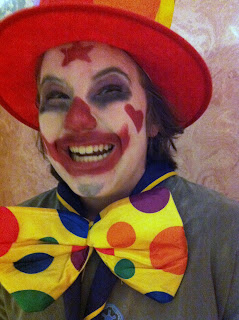 Wee clown - my Hunny hid Wee clown in a vase. A waist high vase that's tucked behind his favorite chair. A small child visitor found wee clown. I set him on a bookshelf and forgot about the clown.

Goof Ball found him. And hid him. In plain view. This is in my bedroom: 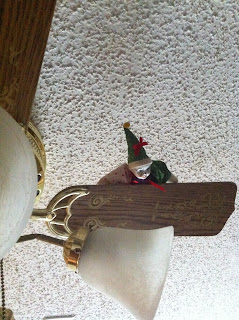 Less than a week later, we're visiting a friend, Goof Ball and I. There, on the friend's kitchen wall, sitting on a wall ornament, is another little clown. Her husband moves it around the house to scare her. Goof Ball asked to borrow the clown and of COURSE my friend said yes. Two days later, look where we found the new clown: 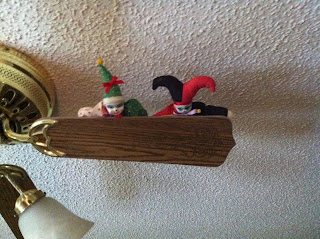 I love my life. I love my children. It really doesn't get any better than this. Especially knowing I have a drawer full of clowns tucked away for later. Mwahahahahaha!

I think when funny child is in the room may be fun to sneak the fan on!!!

How funny that the clown hiding is now a family thing!

How did Wee Clown escape the terrorists?

Video! I want video! You do have the coolest kids and the best life. And an endless supply of clowns doesn't hurt.

Flea, you always remember the day when a child of yours joins you on the dark side. Always. It's such a heart warming moment when you know you've raised 'em right!

OMG. When I looked up (at your photo) and thought of my bedroom fan...I EVEN got the heebie geebies and I love clowns!!

Your hubby hasn't a chance in hell.