At the Blue Ridge Writers Conference (where I had lots of fun and walked around with pneumonia and met new people and struggled to breathe and learned so much I thought my head would explode), I picked up some novels and had a few signed. One of my favorites so far is by a writer who's evidently written quite a bit, but whom I've never heard of. Allow me to introduce you? 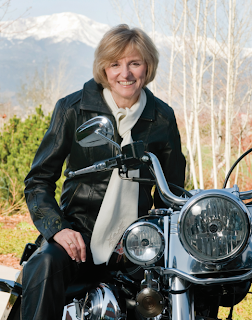 This book was an unexpected delight. The cover illustration is a woman on a motorcycle. First page of chapter one, the main character, Allison, is sitting in church. I was prepared to be less than dazzled. I went in with prejudice, frustrated to see the book setting begin in a church. Somehow that sets the stage, for me, for disappointment on a grand scale.

Allison and her nudges from God turns my prejudices and expectations on their ear pretty quickly. Nancy Rue drew me in, kept me there, threw people all over the place in the process, and did NOT disappoint with the ending. Nothing neat, tidy or formulaic about The Reluctant Prophet. I LIKE IT. Very much.

What's not to like? A middle aged woman, is told, by God no less, to buy a Harley. Then learn to ride it - something she's never had a desire to do. She meets a whole group of people who turn her prejudices and expectations on their ear, the Harley riders. LOVE. Then - THEN - she takes on the city's underbelly. One person at a time. And not how you'd think.

Cool trailer, huh? Make you wanna read the book? It's worth your time, I think. And it's a quick read - perfect for a day at the beach under an umbrella. Let me know, if you read it, what you think, please.

I want to read this!

Good review, Flea. Glad to know you're not blown to bits by the rash of nasty weather in your part of the world.

Sounds interesting! I've been looking for new books to read this summer!