They're officially Goof Ball's chickens, but the Hunny and I are having our share of fun while we can. Today's story will be told with pictures. 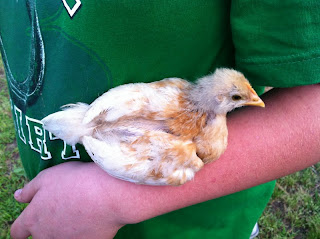 A boy and his chick 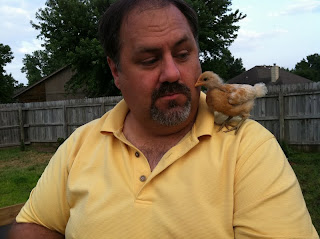 The Hunny and his chick, having a convo 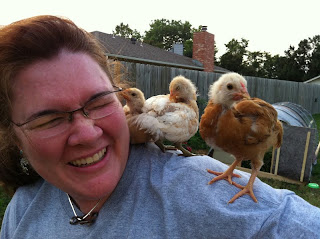 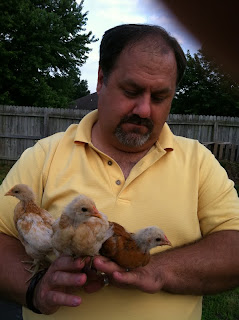 Awww! There's something touching about this shot 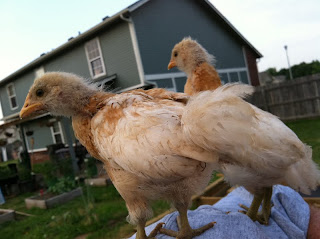 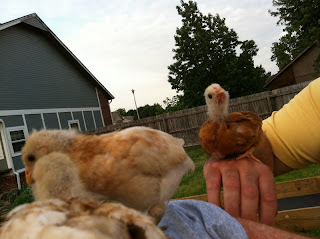 They are adorable! When do you find out what sex they are???

Make sure Lou the Loud doesn't get near them. They are beautiful!

Cute!!! They all look like girls to me, they have small combs and their tails are already filling out. Roosters develop their combs first and tails last generally. :D

Haha. Baby anythings are lovable even when the puff turns to feathers and the legs get too long for the body. Good thing we keep loving them even when they become adolescents.

Omigosh! The chick(s) is(are) going to be beautiful. Way to go! I'll bet they could easily rid someone of head lice....or not.

Oh I LOVE chickens. I would love to have some. Maybe when we finally stop working and do, do, doing so much! Have fun with the little "gals".

I've always thought that raising chickens would be so interesting. Go you!

Ha ha, there seems to be a chicken obsession in blogging land at the moment. Every blog I visit is talking about chickens! :D

Glad they didn't peck your eyes out btw!