Goof Ball will be 14 on Friday. He's been to a week of scout camp, countless scout overnights, nights away with friends. All over the last four years. Monday he left for church camp. 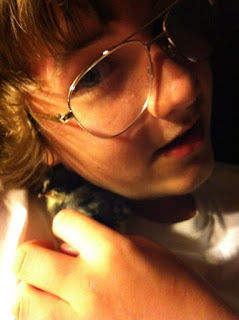 Four days. With people he knows. Including girls.

He was some nervous. I couldn't figure out why. At first I thought it was the showers - something about doors on showers and hearing stories about camps with no doors on showers. We checked the camp website. Curtains they have. Curtains are good enough.

Then I thought maybe it's the fact that he has to shower at all. I don't think he ever showered when camping with the scouts. No girls around, hence no need to shower. Nah, that can't be it.

Maybe it's the whole girl thing. Middle school girls in swimsuits. Hmm. No, I'm thinking that's probably a plus.

Sports? Surely there isn't too much in the way of sports. Goof Ball has a C-N bar tarsal coalition, or bones where joints should be connecting his heels to his ankles. Sports hurt his ankles. But if he stays in the water, he should be fine, right?

Maybe it's that his birthday is Friday and he'll be getting into town late Thursday night and he doesn't think we'll celebrate. That's probably what it is. I hope that's all it is.

Thing is, we got him something cool, something he's been asking for for six months. And I'm cleaning his room while he's gone - something I've never done for him. That's right. You heard me right. I don't clean my kids' rooms. Hopefully it will be cheerful for him.

Cleaning his room - it's made me sad. We'll be homeschooling this youngest child in the fall. He's been bullied at school the whole four years he was in. He's so ADD, poor thing, and so nostalgic and empathetic. I've been finding things in his room from his earliest childhood. Poppers, his big floppy stuffed tiger, tucked behind his bed. Got that when he was three. Beanie babies. Beginning readers.

Other things, like piles and piles of clothes. Trash. Bits of broken toys he can't or won't part with. I'm throwing away the broken things. Throwing away clothes. Bedding. He has so much bedding. It was a mess in there. I was nearly in tears all day.

The chaos. The stuff he clings to. The clothes. The mess. The way an ADD adolescent lives. I get it. It breaks my heart. It hurts. I didn't throw away the good stuff. Really. And I don't even know how to teach him how to do it right. I still haven't learned. It hurts.

I'll have him all to myself next week while his siblings are at camp. I'm looking forward to spending time with the boy. Hearing about camp. But right now? Sad. Sad he went away to camp reluctant and nervous. Sad about the state of his room. Sad that I'm so unsure of what to do. Sad to feel it all, experience  it so deeply, knowing that there's no easy answer for my sweet boy.

He truly is a sweet boy. See this boy? I'm proud of him. Glad he's mine. I love him. 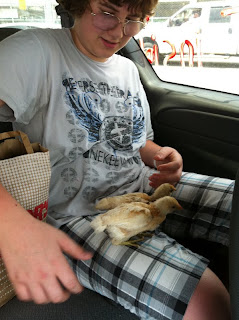 He's awesome. And so is his mama. And he's lucky to have you. Such a hard job, isn't it? Hugs.

I know how you feel. No matter how much time passes, those critters are still attached to our hearts. I remember feeling the ache as I went through boxes of baby clothes or worried about them when they were trying their wings. I still do. A LOT.

Oh Flea. I wish I had known yesterday was a struggle for you. I could have been there to at least hand you Kleenex and hold open the trash bag.

Sometimes it takes someone else cleaning up our mess to make us realize it was a mess at all. He is clinging to those things for a reason. They equate to a past filled with memories - good and bad. Broken and hidden in the depths of his room just as they are in his mind. He finds safety at home with his family who understands him. I get the not wanting to leave. Change is hard. He's growing. Maturing. Learning about the world and the people in it. But family and home are constant. Your love is constant.

You are a wonderful mother. You don't need to teach him how to do it right - getting rid of his stuff - because there is no right. There is only can. You are teaching him by trusting him and giving him ownership of his space. By letting know him know that you know it's hard to part with things. By showing him he can hold on to things of the past if it means he can embrace his future.

Giant hugs to you!

What a GOOD mom you are! And what a VERY DIFFICULT time this is for him. As you know, these are the awful years. It's such a great thing for you to be able to help him through this with homeschooling.
Hopefully camp will be a wonderful blessing for him.